A trip to Hesarghatta and NtriyaGram 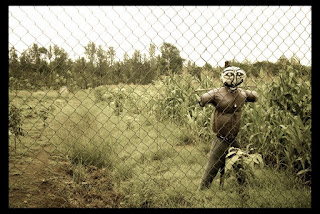 As the weekend approached, we had been long planning for an outing. As the last planned outing was washed with one of my previous post. We had dreaded over the fully planned trip to Mysore where the rain had played spoil sport. The weather looked good on Friday evening as I left my office with the printout of a map of place called Hesarghatta.
Early morning as the alarm rung at 5 am we got up and took to our journey to Hesarghatta. The intention was to have a good day out and capture some scenic photo and quite a few birds too. It was an quite early start and the road was empty. We hit the outer ring road as the clock struck 5:30. After some time; as we crossed Hebbal flyover, we hardly knew that it was going to be a never ending journey. The Goggle map helped little as the road started going through lot of villages and we had to take directions from lot of people. In the middle of the journey; we started feeling if we were going to the right place or not? Finally, somehow after driving of one hour and thousands of route changes; we reached a small village called Hesarghatta. It looked that our journey had come to an end and we were in for a surprise.
This was the place where we could also see the same road leading towards Narityagraam which is a dance village. After few minutes drive; through the cloudy weather, we reached this huge junction which you will normally have at the bank of a river or a canal. Few of the villagers were standing there going for their nature’s call, were a bit taken aback of surprise by their early morning visitors. We parked the vehicle and rushed upstairs. As we reached at the top of the bank there was another surprise waiting for us; An awful one . It was a huge river bed without a river or a lake in it. We could hardly believe our eyes and took a round of this whole place to discover nothing more than few birds. The place indeed was very green and scenic but hardly close to anything we expected. After spending few minutes and a couple of shot; we decided to move along the same road and check out the Narityagraam. we went past a poultry form and turkey center, and we came across a film training institute. After a few minutes drive from there we reached the famous Narityagraam and a very beautiful Taj Kutiraam. The place was a treat to eyes and satisfying. But disappointing too as Narityagraam showed up a sad board of being closed due to vacations till 1st Oct. We checked 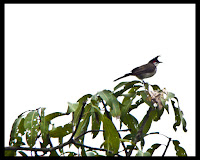 with the manager at Taj Kutiraam about the famous Hesarghatta lake. To our surprise; He told us that the lake has already gone off since last 10 years. Before that Yes it was famous for River rafting and birding. We spend some time and captured few birds and started b 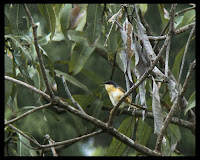 ack home. It was indeed a disappointing drive and I was wondering How the websites have been supporting photos and details of Hesarghatta.
A king fisher captured our attention and then as we moved around the lake, here is one of the birds which i caught at hesarghatta lake. Few birds were around there and most of the crows and brahmin kites were making rounds of this place. Unforntunately i could not get hold of any of those.

As we had come out of the NrityaGram, Outside the compund wall, could see these few birds and could not resist capturing them. I am sure these resorts, like the one besides Nrityagram, TAJ KUTERAM make lot of contribution to the nature in a way to lure guests and in return nature comes back visiting them with full bloom and makes the spot worth paying for it. 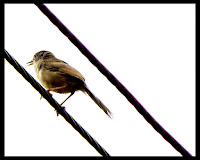 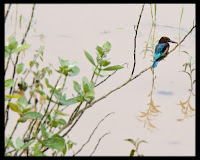 And this one was a beauty. I spent sometime running behind these, as they wont stick to anything for long. tried spot metering these brids and if you could observe the beauty, the bird at first looks like it has its mouth opened up in a howl posture but actually its the crown in its head. I am still not sure about their names. So any comments about the same would be appreciated. I am planning to visit this place again, but for nrityagram and probably would check in at the TAJ KUTERAM as it is an awesome place to spend time at the outskirts of bangalore.
Labels: photography