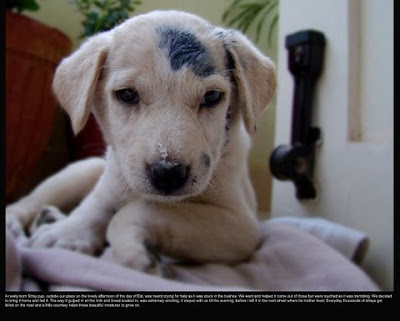 Some weeks back, over a slothful Sunday afternoon, all of a sudden my wife got restless to some noise coming from outside. I was in an extremely lazy disposition and didn’t bother for; the movie playing was worth it. But then she moved to the balcony and tried to look for something which was taking her attention. I was snoopy this time. After a while, she started calling me and pointed to a Little stray Puppy, stuck in the small garden with vegetables and some nice bushes planted throughout. The puppy was too small in size to make his way out, and the bushes also not kind enough to extend any help and now, there he was, stuck in the middle with completely confused mind. The line of sight, I presume would not be more than half the length of the bushes, in which it was, bewildering him further. It was getting restless and crying. My wife, though extremely petrified of dogs, but generous, asked me to do something about it. For a while, I was wondering if it would be the right thing, since a week back itself a bitch, gave birth to some pups and probably my helping hand may land me into a combat with the mother.

Finally overriding the fear, I charged down stairs and went outside near that garden. I tried to calm the pup and called him, expecting that listening to me, he may try to get out and come near the fence. I could have easily rescued him from there, by lifting him out. But nothing seemed to help and the battle between the bushes and the mini paws of the pup continued. By now one of the other neighbors had also come out and felt sad for him. I was left with no options and had to do something like that. I went to the neighbors’ place, asked for permission and jumped over the wall to get in to the garden. Carefully making my way through some herbs planted in the corner, I went up to the pup who was now struggling with the marigold plant. The fellow was anxious and was trembling. The pup weighed almost nothing and looked not been feed since long. I could jump the wall back, after having rescued, and holding him in only one hand. As I took it near my apartment, waiting for the rescue operation to finish, my wife was elated and gave me a look, as if I got the Indian sailors out of the Somalian hijackers’ clutches. We made arrangements for milk and bread dipped into it, and he gulped and slurped everything in a jiffy. He was still trembling and I could understand that he was scared. He was alone and quite young for being able to survive as a stray dog. I could not though sight his mother yet.

After a while, we decided that we would take him upstairs to our apartment for sometime. My wife made a nice cushioned bed with some rags in the balcony for him, where all proud possessions, my plants sit around. In one corner were my fishes swimming around and would peep through the fish bowl glass occasionally, to figure out as who their new friend was. We kept him for sometime, played around but soon he felt asleep. As he got up, he had a little more water and bread and then tried to move around the balcony, having the feel of the place. By the evening, we could observe that he wanted to go out, and it was the time, to say our little friend good bye. We left it in one of the safe corners, where after sometime; he caught up with his siblings and mother. What a Sunday it was!!