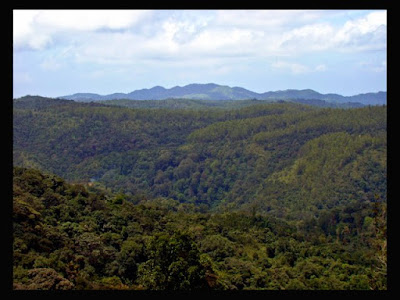 This has been the first time I prepared my notes for writing a review of my travel, and it kept sitting on my desktop without getting published. Sure, this Saturday is a lucky day!! Here is the story of our travel to the Scotland of India, Coorg.

After waiting for long, almost 15 days for my booking to get confirmed and lot of turnaround time, we finally got our confirmations for the 27th and 28th of September, 08. I was curious to get my booking done with Cauvery Nisargadham Forest resort as it was something which grabbed my attention since I saw some photos of this place. We got our reservation from Bangalore to Kushalnagar with the Airavat, KSRTC for the weekend getaway.
As the Friday evening approached, we were slated to board the 11:15 bus from Kempgowda bus stand, aka Majestic. We reached in time, but as everyone is well aware of the jams and hang-ups at the bus station, the bus arrived after a huge jam at 11:50. We were comfortable in the nice cushioned seat with a gushing AC trying to cool the interiors and a brim lightening with people still settling down and a group of students highly excited about their trip to Coorg occupying the back seats.
For some information from my end, I shall be putting in data and the lines would be underlined for the benefit of the readers. Coorg is one of the most scenic districts in Karnataka and the place of main attraction is the central town of Madikeri which is around 240 kms from Bangalore and has a traveling time of almost 5-6 hours depending on the traffic. The road in the Coorg district at not the one of which a state could be proud of and can be a real bumpy ride once you board a local bus from Kushalnagar to Madikeri.
The ride saw us snooze soon and as I got up, it was almost 4:25 and the bus was entering some outskirts of a town. Soon in another five minutes, we got down to this small and completely light out town of Kushalnagar. But you know what, it was really cold. Fog all around and chilling. We never expected to hit the town so early and managed to get us an auto rickshaw to get a boarding for few hours, so that by the morning we could go and check in at the Nisargadham where we had made our bookings. We managed to get ourselves a room for few hours, and most of the lodges around kushal nagar trade rooms between 250 and 600 Rs depending on the requirements. Since we were pretty early in the morning, we choose to rest for sometime and head for a walk by 6:30. Guess what, 6:15 when we got up, and peeped out from our room’s window at 2nd floor; it was all foggy and quite low in visibility. I could capture couple of birds from this window, as there was a tree nearby which had almost all birds come in and sit for sometime. We soon came out of the lodge and were surprised to the see the town is a late rising one. Till 7:45, we were moving around the place to find a tea stall. This was a surprise for me since I never expected the whole lot to be closed. After the tea, we returned to our lodge, got ready and then asked for directions for the monastery at Kushalnagar. The lodge reception shared that the auto rickshaw shall charge Rs. 15-20 for dropping you there. We were soon on our way after negotiating the same and another observation, since the town is a very small one, auto folks don’t get lot of passengers, that’s why they aren’t nasty as in Bangalore and soon settle down on workable. We were heading into the monastery in first place this morning, as per plan. 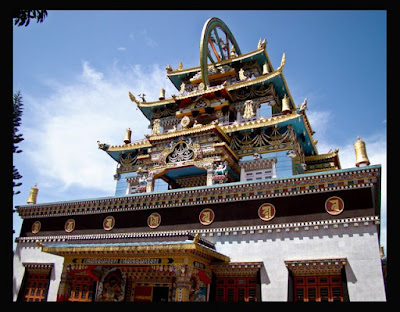 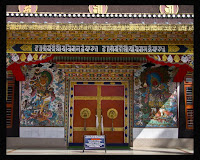 m. Their living is extremely simple and teaches them the strength of mind. For some it may appear a life of extreme hardships. We spoke to "Yeshi", a monk at the monastery who came here from Darjeeling in year 2000. At the age of mere 16, he has already completed his eight years of schooling at this very monastery, and is all set to get into the college level of studies. He was more than happy to explain all these and continued telling us more insights into their culture and atmosphere of the place. He explained that the parents normally visit and they get to go home for three months every year. The studies can be a reign of staying at the hostels with other fellows and following the daily routine.
As we were moving around the bea 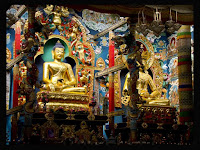 utiful adobe, I realized something which was completely uncommon to the daily life in outer world, and common among all living at the monastery...this was the calm on their faces, in their speech and in their mind. I never came across anyone who 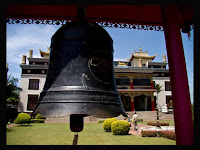 shyed away or who didn’t want to talk to us, or who didn’t want to answer our questions. As we entered the main prayer hall, we were shocked by the size and the grandeur of the statues inside. This hall was as huge as an indoor stadium and all the students must be some 2000, were sitting in queues with a small book, having Tibetan language inscribed prayers on there. Also all of them carried glasses and mugs with them, in which they are served tea through the session. The idea behind the tea is a cleansing potion for the body and soul. Also all had a small sound making "DAMRU" which would go all in sync with their prayers. Not to forget, there were few huge GONGS placed in the hall, among the queues of students which shall be boomed occasionally. Among t

he students, at the front, on raised platforms, were few senior monks, who were sitting and I am sure they must be analogous to principals and staffs of this college. I was curious to know about these gigantic monuments of Buddha, and two others in this main hall. YESHI could help us, and told that on the left, was "GURU-MA_SAMBHAWA" who is god of fighting and overcoming fear and the right side of Gautam Buddha is taken up by "AMITAYU" who is granter of long life and healthy living.
YESHI also explained that the students stay here at the hostels around the monastery and their day starts with a long prayer session from 9-11. Actually when we had started moving around in the morning, a monk came running in and boomed a small GONG kept outside the main hall and then started a large horde of students who started rushing in. It was kind of a school bell announcing the Morning bell for them. I was quite curious about their particular dressing and got to know that part of the dress wore on the lower body which appears to be something tied around the waist, is called "SENTAP" and there is yellowish Orange colored inner sleeveless shirt which is called "TODUNG".

Keep watching for this blog, for i shall be updating with another report of the resort and sightseeing around madikeri. Expecting to get your comments if you happen to read my blog.
Labels: photography