Well, as we returned from the places covered on day 1, we settled for some lunch. Since the breakfast was a real stealer, we thought of giving our own hotel restaurant an
other go. We went to the room, freshened up and came down. 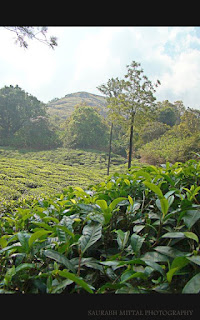 The menu was quite elaborate and did have everything which we
were thinking to munch on. We ordered some Manchurian, paneer and Rotis which were served instantly. The food was extremely hot and i would repeat the same words, "To Eat, is to believe." I would highly recommend eating at the PPS restaurant if you are at kalipetta.
We were extremely happy and with that lunch, and went to the room for some rest.
During the evening, we decided to take a stroll around the small town to check the place more closely. The town is quite small but the market is quite good in comparison. Across the main road, you have shops ranging from everything from anything. The noticeable aspects were the vegetables shop, which had real good healthy vegetables available. I didnt know if they were costly or cheaper, but good to see that variety and freshness. Also there are some huge jewelery shops across kalipetta with the displays being mind boggling. Looking at those shops, you wont even equate Kalipetta to a small town as it looks.
Eating out at a bakery:The other good part i noticed in Wayanad was the bakeries across the district. Similar experiences i had in Hyderabad with excellent bakeries items at quite cheap prices. I would highly recommend taking a go at "the walnut bakery", on the main road in kalipetta. Should not be a problem to find if you are around the bus stand of kalipetta. The bakery had excellent assortments and fantastic prices. Sometimes, i feel going from Bangalore makes you love the destination even more for whatever it offers. We spent the evening walking around and settling at this bakery. Apart from this, the town does not have much to offer for the evening.
Planning Day 2:As we returned to our hotel, wondering about the next day, we settled at the reception. I starting the conversation with the attendant and wanted to know the best possible route for our next day destinations. He offered us a plan to take up a Jeep and a plan of places they offer. The price looked good for the plan, being 1000 Rs per person(2000 for our trip) for the full day by jeep and all entry and camera fees included. He was also ready to give us some discounts on that price. As we were discussing, he also told that if there are more folks who could join in, the price would automatically come down. As it was supposed to be, Brian & mcaye, two tourists from Florida, USA staying at our hotel, too came looking out for something similar. The attended informed us that he shall discuss and let us know. After ten minutes we were informed that now we were four for the morning trip, since brian and mcaye too were willing to join in. The price came down to exactly the half and we were geared for an early morning start of 6:30. The plan drawn was
Kalipetta->Muthanga Wildlife sanctuary->Breakfast at sulthan bathery->Jain temple->Eddakal Caves->Surise Valley->Kanthapuram WaterFalls.
Committing to the plan, we went to prepare for the next day's early rise. 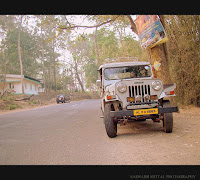 Day 2...Hectic & Fun:
We rose quite early around 5:30 and got all set before the clock struck 6:15. as we came out, it was a little dark yet.
I went to the hotel top to catch any glimpses of signs of sunrise, but it was still early for that. We reached the reception and the Jeep had come in. "sandip", a skinny fellow, localite and knowing little english, since used to making trips with visitors was awaiting us. Meanwhile, Brian & Macaye too joined us. We started without delays at dot 6:30 on a plan to stop in between for a cup of tea.
Muthanga Wildlife sanctuary(MWS):
The road was long to muthanga wildlife sanctuary. It is approx. 25 kms from kalipetta and we had to pass through sulthan bathery. Infact, the sanctuary is on the mainroad to bangalore and just in the begining of kerela. 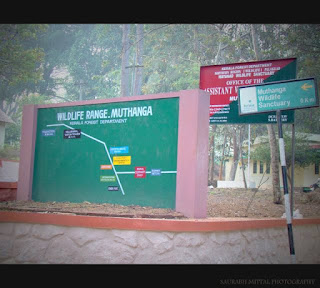 (At the entrance of Muthanga Wildlife Sanctuary)
The sun had just come out while we sipped tea on our pit stop inbetween. Mahindra Major, did great job on the empty roads with fields around, surrounded with mist. It was cold, real cold
weather while we were driving down to muthanga. As you reach muthanga village, there is a huge Forest of bamboo trees, which is its characterstic symbol.

(A panaroma while we stopped over at the lake in Muthanga WildLife sanctuary. Click to view large)
"Screeccchh", as a truck pulled over near the toll gates outside the MWS, i continued clicking some shots. The weather was cold and sandip had gone to buy our tickets. Soon we were on our way to the sanctuary and the jeep was the best vehicle for this terrain. We first stopped near some elephants to click some shots. The jungle looked extremely beautiful, but a little strange. 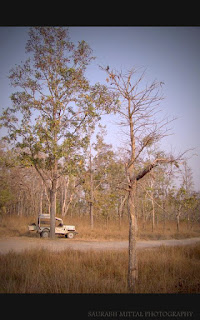 The hush, fallen leaves soaked in dew, cold air, little sun
and still lot of dark areas around and those huge tall trees every where were sort of scary. The elephants had huge teeth and were full bodied tuskers. We soon left them and moved towards the forest interiors. The birds made lot of noise as they were just getting to their daily chores. Suddenly we stopped, since we sighted a group of cheetals. Some ran away, but one of those was like spell bound seeing us. I absolutely love animals and their expressions. Above that i even more love the way their expressions are put into words as and how we love them to. :)
Sandip explained that the forest is on the brim where Karnataka, Kerela and Tamil Nadu share their borders. Now the stretch which falls in Kerela has been named as "Muthanga Wildlife Sanctuary",
The one in Karnataka is known as "bandipur wildlife sanctuary" and the remaining part in tamil nadu is called as "Mudumalai Wildlife Sanctuary". 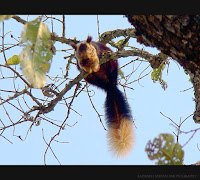 Now this was some real piece of information. Also he showed us the way inside the forest which according to him, a few kms further would lead you to TN border or Karnataka border.
Sandip took us to a valley, which had huge number of deers. The place was so beautiful that we got down and it took at least 10 mins to absord its effect. The deers all around were amazing. Not to mention, the forest area itself showed me more than 50 species of birds everywhere including golden oriole, blue thrush, flycatchers, sun birds and what no. 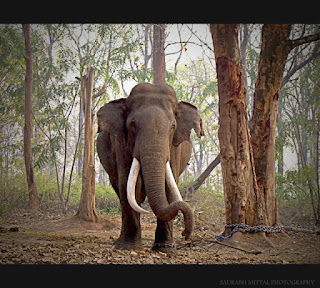 Though i was not on a birding trip and refrained from birding shots, still was happy to notice them live happily in this hevean. We also got down around a lake in the forest where all the animals come to drink water. We also saw the malabar gaint squireels and the way they move on the tree tops, is something to seen than explained(Photo attached). On one place, the jungle Langoors were all excited and tried to bend down every single tree or branch they got on to. Finally after spending some 2 hours time and clicking birds and animals, we came out of MWS to the main road.
I shall take you further on the trip of Wayanad..So hang on and return back next week for the remaining part.
Labels: travel