This Saturday, the setting was to discover the Puttenhalli Lake, Yelahanka. The websites spoke in high admiration about the place. It seems, there are some plans to convert this place into a bird sanctuary. Since have explored all the other lakes in the vicinities of the city already, wanted to check out the birds at this place which appeared to a Mecca for birding. Morning start, as early as 5 am was ideal and through the cold December morning, we cruised towards Yelahanka. But soon, everything fell apart. Most of the people on the road, didn’t know about the place and over and above, they were a little dubious of our tripod stand and bags carrying the cameras. Near the yelahanka bus depot, the duo of a driver and conductor guided us the lake site, but before that asked for our reasons to be the going there so early. As per their instructions, we were further caught in a jiffy, since the place now we reached was the Puttenhalli Layout , instead and could not sight any lakes around. We spent some 30 mins investigating and searching for the correct place. After a while, we decided not to miss the beautiful morning sun, coming out and planned to drive down to Hebbal Lake instead. 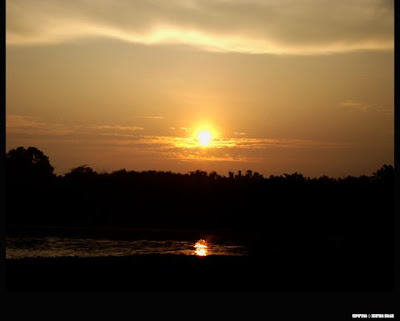 (Please click for bigger size)
On the way, near a Shell petrol pump, with a Rs. 5 reduced on the price of Petrol, got some extra fuel poured into our drive. Soon, we found a suitable place to capture the full bodied Sun coming out. It’s been long time since I had seen such a sun. From my apartment, the rising sun can not be viewed when it is in its hues, so it was quite famishing to click and observed for sometime. Soon we continued to drive down to Hebbal and rushed inside, since the light now looked perfect even though there were couple of clouds threatening us.
Hebbal Lake looked to be over showered with water and those levels spoke for themselves. The light makes all the difference when you are clicking and this looked the perfect day. Pelicans motored around the lake in their ever grandeur. The coroments flew around in their same pose as 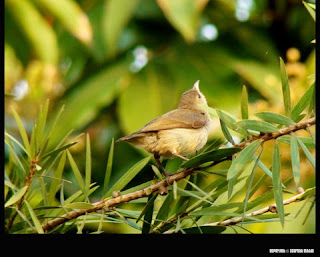 if struggling to hold themselves in air. There were lot of cattle egrets and larger egrets around the lake, which are so white and serene and a joy to see in the morning. As we explored the insides of the park at the lakes, there was lot of noisy birds, which had they, activities in full swing. The famous Sunbird, Purple Rumpled Sunbird and the Purple sunbirds flew fast and looked always interested on the bottle brush flowers and swung on those. Sunbird is the signature bird of Hebbal Lake and so is the little green Leaf bablers. These are extremely swift birds and can be a trick to capture a good shot of these birds. We could sigh 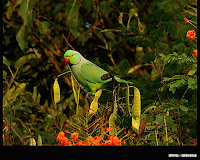 t some excellent Parakeets, and I have to mention that my best parakeet shots were taken on this very day. If the light added icing to the cake, I also took a very slow approach, crawling to catch the bird from as near as possible. Few other birds seen were the Red Lapwing, Asian Koel, Large Kingfisher, Herons in their varieties. The lapwings are flying creatures but they love to be on the earth and at the Hebbal Lake, they can be often seen come back to the circular park in the lake. I have sighted them almost every time I have 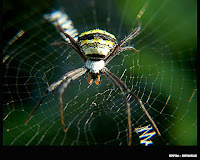 visited the lake and this time, I could catch a good shot of these birds. In the end, we spent a little time shooting Macros with our model, a huge Spider busy handling traffic through the web.
Labels: photography